Unique technologies that respect the environment 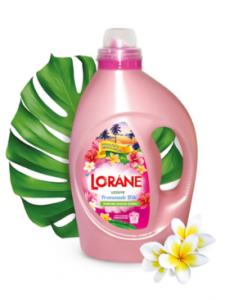 New laundry Summer Walk takes care of the colors of your clothes while providing a touch of fragrance, sweet and unforgettable.

Its woody, fruity and floral fragrance will travel you in summer during all the year.

Its formula protects the fibre of your clothes and its colors.

Its perfume will bring you a sensation of freshness and sweetness during all the day. 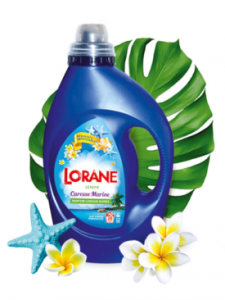 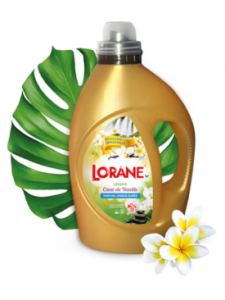 New laundry Heart of Vanilla will bring you impeccable results while protecting your laundry.

Its intense and sweet perfume will offer you a true moment of escape with each wash.

Phosphate free laundry and your skin

Phosphate extraction for laundry causes pollution of air and water on Earth and especially in mining areas.

What is Phosphate-Free Lye?

The phosphate is used in cosmetics and detergent. Yet it is a miner that feeds the planet. It consists of a mixture of fish bones and bones of marine animals. So phosphate-free detergent is environmentally friendly.

How is Phosphate extracted from nature?

To release phosphate from the earth, miners use explosives that release clouds of toxic dusts that spread. This creates unprecedented air pollution.

Phosphate arrives in millions of tons in phosphate laundries. These plants decompose the phosphate of its radioactive components such as cadmium and uranium, poured into the water. Water is drawn by millions of cubic meters in the subsoil of the water table, 24h / 24h. Then, they discharge the extremely polluted water containing the toxic residues that they have just extracted from the Phospate. The authorities do not treat the waters, there are mountains of chemical waste which cause a degradation of all the flora, necessary for grazing, in a region where grazing is important, as for example in Metlaoui in Tunisia. The region is now semi-desert, water is scarce and the subsoil is contaminated.

This pollution takes away the population, businesses, doctors and creates a crisis of employment. The country’s highest unemployment rate is in the mining area. For the first time in 2008, an unprecedented demonstration is organized by the inhabitants and miners of this disaster area, in this country ruled by an iron hand. The movement will be severely repressed, with face to face with the forces of order. Subsequently, other strikes blocked the mines every other day. Some customers of the Gafsa phosphate company have begun to turn to other suppliers, in Morocco or Saudi Arabia.

Phosphate and damage to health

Lung cancer, silicosis, dizziness or cardiovascular disease such as osteoporosis are recurrent diseases in the pelvis handling. The average patient is much higher in the mining regions than elsewhere in Tunisia and the life expectancy is shorter than elsewhere. These diseases are caused by the environment, ie the toxic particles of phosphate, found in water and air.

Are there any phosphate-free detergents?

One way to stop this phosphate industry is to decrease its demand.Most brands of detergent and cosmetics use Phosphate.However, there are new phosphate-free detergents on the market, as proposed by the LORANE brand.Information from the report “Tunisia, the forgotten of phosphate – The undertones of globalization”, aired on Public Senat.

Do you have scratching skin?Irritations, eczema, allergies?Baby fidgets?After doing laundry, clothes smell chemical and bother you?Do you have insomnia?
One of the reasons is probably youryour phosphate laundry, contained in most detergents.
There is a solution !
Lorane laundry is made from ingredients such as Aloe Vera, talc, olive oil, African black soap, exotic flowers and
lavender.

Useful properties of phosphate-free laundry:– designed specifically for the sensitive skin of adults and children;– kills bacteria on your clothes;– has a pleasant natural fragrance;– no allergies;– your fabrics stay soft.

In addition, the phosphate-free detergent allows:– extending the durability of the tissues (your favorite clothes will last longer);– avoiding skin diseases;– to save you from a long and unpleasant medical treatment.

By choosing a phosphate detergent, you harm yourself and the environment. Some explanations :

Phase 1 :Phosphates penetrate the skin through clothing (Ph change, lipid content, amino acid). Toxic compounds and heavy metals permeate your skin.)
Phase 2 :What the absord skin goes in the blood and changes the percentage of hemoglobin, protein and blood serum. This leads to the deterioration of the internal organs, the worsening of chronic diseases and the body has more and more difficulties to fight against viruses, bacteria, parasites.
Phase 3 :Diseases appear.
Children and adults are allergic, lesions appear in the blood, lungs and liver. With a large accumulation of phosphate, it can poison the body to brain tumor, cancer and infertility.
All the agents used in LORANE detergents are developed on unique technologies and meet the highest quality and profitability criteria.
Choosing Lorane’s phosphate-free laundry is choosing to protect yourself and your loved ones, support your health and be in a good mood every day! 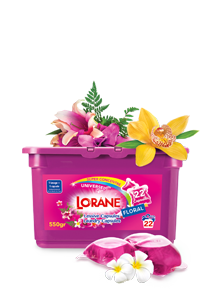 This new formula offers a high whitening effect ; it cleans persistent spots giving a pleasant and unique aroma of flowers. This laundry capsule is for white and color clothes and for all the family. This is effective, economical and is very popular for its Price and Quality.

This new formula offers a high whitening effect ; it cleans persistent spots giving a pleasant and unique aroma of flowers. This laundry capsule is for white and color clothes and for all the family. This is effective, economical and is very popular for its Price and Quality. 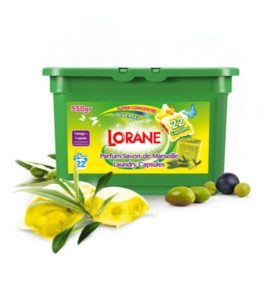 Discover the range of softener LORANE in 1 litre packaging with flavor of: “Orchid and Driftwood” and “Sandalwood and Vanilla oil”.

LORANE has created a range of softeners based on aromatherapy that diffuses pleasant smells. Its fragrance of Orchid and Driftwood will make you travel and its beneficial action will bring you a relaxing sensation. Brings an extraordinary softness and a unique and lasting fragrance to the linen. 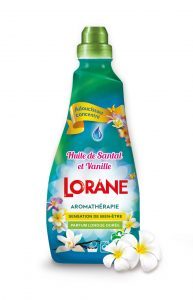 LORANE has created a range of softeners based on aromatherapy that diffuses pleasant smells. Its Vanilla and Sandalwood fragrance will make you travel and its beneficial action will bring you a feeling of well-being. Your linen will be extremely soft.

This formula respects even the most sensitive skins.

A formula for a perfect shine and a pleasantly perfumed moments.

The dishwashing liquid “Perfum of Pine” LORANE is a range for soft hands and shines dishes.

A super degreaser formula. This dishwashing is so concentrated that a few drops is enough to clean all your dishes, even with warm water.

Fresh Pine fragrance for a shiny dishes. Dishwashing liquid for a perfect shine and a pleasantly perfumed moments

The dishwashing liquid “Red Fruits” LORANE respects the beauty of your hands.

This formula is very effective against fat and dirty. With the dishwashing liquid LORANE your dishes are more sparkling than ever and your hands keep their softnesse.

A super degreaser formula. Dishwashing liquid for a perfect shine and a pleasantly perfumed moments. 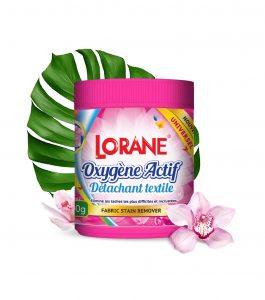 Each spot is different and depending of their composition can be very tenacious. To be able to eliminate them effectively, it is essential to choose the most suitable product.The more tenacious and complex is the spot, the more adapted must be the removing product .

This is why there is a range of « LORANE Stain Remover » to eliminate all types of spots. Active Oxygen Powder “LORANE Universal” is a new super powerful textile stain remover. The new technology of LORANE eliminates the most difficult and encrusted stains . In contact with water, it releases active oxygen allowing to preserve naturally all the whiteness of your fabric. This unique « Stain Remover LORANE » is especially enriched with active oxygen, which makes it possible to eliminate even the most stubborn stains. The result is incredible from the first utilisation. 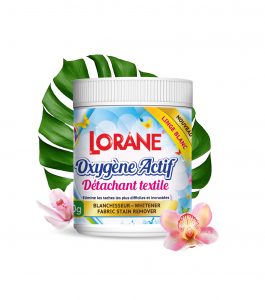 The new stain remover LORANE « Active Oxygen White Fabric » is specially developed to eliminate the most stubborn and ingrained stains even those that have been there from years. This unique stain remover is especially enriched with active oxygen, which makes it possible to eliminate even the most stubborn stains. The result is incredible from the first utilisation. . In contact with water, it releases active oxygen allowing to preserve naturally all the whiteness of your fabric.Active Oxygen LORANE “WHITE FABRIC” is very effective for all types of stains. This formula anti- stain + whitener is known for its purifying properties.